Chair No.14: the Victorian era’s most enduring design

"Never was a better and more elegant design and a more precisely crafted and practical item created.”
Le Corbusier

History has not been kind to Victorian Style and the decorative elements that defined it – not the doilies, the over-stuffed upholstery nor the abundance of pattern and ornamentation...and definitely not the skirted lampshades! The ‘more is more’ Victorian decorative style was criticized right out of the gate by designers and academics of the day, as being derivative and mixing references from past eras in a seemingly random fashion. Perhaps most famously, William Morris was a harsh critique who founded the Arts and Crafts movement, a reform movement that stemmed from an opposition to Victorian excess (and industrialization…but I digress).


In his book At Home: A Short History of Private Life, Bill Bryson writes entertainingly about Morris’ experience as a 17 year old, attending the 1851 World’s Fair at Crystal Palace…where he was so disgusted by what he saw that he ran outside and vomited in the bushes.
One bright spot in the haze of all this is Michael Thonet, the creator of Chair No.14 (now known as No. 214). Thonet (1796-1871) was a German cabinet maker who developed the process of using steam to bend wood. The resulting bentwood designs had a simple aesthetic (refreshing in the sea of heavy, ornately carved furniture of the day) that were lightweight, practical and inexpensive to produce. Designed in 1859, Chair No. 14 has been in continuous production ever since. 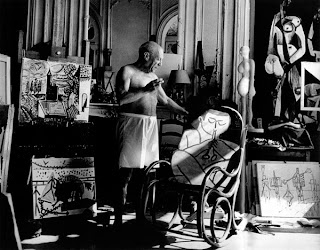 Picasso had a Thonet rocking chair in his studio. Le Corbusier, the Modernist architect, designer and urban planner, was also a fan. Despite the iconic pieces that are attributed to Le Corbusier, he wasn't very interested in designing his own furniture (perhaps the subject of a future post), preferring to furnish his interiors with simple pieces by other designers, such as Thonet's No. 14.
With more than 50 million of these versatile chairs having been made to date, it is considered to be the most successful industrial product in the world.
Today, Chair No. 214 continues to be manufactured by Thonet’s eponymous company, and is available in Toronto through Design Within Reach (www.dwr.com). I highly recommend Bryson’s book (for a taste, download his podcasts at http://itunes.apple.com/ca/podcast/the-bill-bryson-podcast/id403477844).

Posted by Sophie Ratcliff at 14:29

Sophie Ratcliff
Toronto, Canada
What's in a name, you ask? Galerie Jean Desert was the name of Eileen Gray's shop (Paris, 1922-1930). I'm referencing this name as an homage to Gray, arguably the object of the most profound and enduring design crush I've ever had. I'm also sentimental about beautiful (yet financially flawed) retail endeavours, having been there once myself. Gray will undoubtedly figure in many of my future posts. The name of this blog is subject to change, however, if I hear anything litigious from her estate... These snapshots are designed to aid in the exploration of the decorative arts, both historical and contemporary - one piece, individual or concept at a time. Enjoy!